@eirannejad do you have any experience with using the __all__ syntax in the pyi files? I’m looking to update the stubs with the latest set of RhinoCommon changes and was wondering if I should tackle this at the same time.

I have used __all__ in python modules but not in .pyi files. It should be fine tho. It basically controls what is exported from a module. Let’s add and test in VSCode.

@Willem Out of curiosity, does the auto-complete feel faster after the addition of __all__?

Sounds good, I’m tweaking the stubbler application to include __all__ when generating the stubs. I’m also adding some functionality to skip methods marked as Obsolete in .NET so you get a better autocomplete list.

Ok; I updated the packages on PyPi.org. See if these new ones work for you. If they don’t I can adjust and upload a different version

@stevebaer: I’m trying out visual studio code with this. I am trying to mimic importing scriptcontext as I haven’t found a way to do this with the stubb module alone, so I am making a scriptcontext.py living in the project folder. I’m mostly just after the doc object and it’s tables, so the file content is simple:

Then in the script I can do the regular import:

Which will also work when hosted in Rhino.

However, VSCode doesn’t seem to pick up the tables of the doc. In the __init__.py file, the Rhinodoc class has these as properties (the object table for example):

But (at least my) VSCode doesn’t know what an ObjectTable is so the return type is lost. I found that if I import Rhino at the top of __init__.py, and then put the return type as:

Then VSCode is auto-completing the object table in my script.

Do you think this could be included in the stubb generator for all Rhinodoc tables (or maybe all Rhino return types, I don’t think VSCode knows what any of them are)?

Hi, there is a question that are there any ways to use pycharm for editing RhinoPython and keep pycharm and rhino interlocked?

hi @stevebaer @eirannejad, It´s been a while since I use the stubs… are they supposed to work with the latest versions of python? I can´t manage to get any autocomplete in VS Code with ver 3.9. If not, which version do you recommend I use? Thanks!

Hey David; I also haven’t touched this library for a long time. They should work with 3.9

I can confirm that I cannot get autocompletion to work in VSCode. Current anaconda 3 (python 3.8.5), Rhino-Stubs installed but not working unfortunately.

edit: could it be that the stubs are not using the right syntax for VSCode ?
see List comprehension in __all__ definition hides module members · Issue #289 · microsoft/pylance-release · GitHub
by renaming the folder from “Rhino-Stubs” to “Rhino” and editing the __init__.pyi to include

etc…
before the line
__all__ = ['ApplicationSettings','Collections','Commands','Display','DocObjects','FileIO','Geometry','Input','NodeInCode','PlugIns','Render','Runtime','UI']

I got autocompletion to work. Seems like these files need to be updated or I don’t get it. I don’t know if this is a clean solution or not as I am literally just starting out using VSCode and Python.

@stevebaer I have successfully loaded Rhino/GH python stubs in VSCode by doing a few minor tweaks.
Check out branch: /fixed-stubs-for-vscode-RH_7.2.21012
Hope it helps everyone

Usually I import them individually to make the autocomplete work without modifying the stubs.
At least until the stubs files gets an update

I’m not sure what is the best solution to this, but the autocomplete doesn’t seem to pickup the namespaces inside __all__ in VS Code

I found that it works in VS Code by importing submodules in __init__.py files:

Thanks Tony, I’ll try to take a look at your github pull request on this soon

It is possible to complete Rhino3dm’s PYI, more exactly all iterable objects break type annotations.
Such as File3dmObjectTable or Iterable[...]
jmv

@stevebaer I wanted to add to this thread to say that I’ve also successfully started using the stubs in Sublime Text 4. Thanks for making the stubs!

For anyone else who wants to use Sublime Text:
Steps are:

You should see ‘append’ as a suggestion because testList is a list. You will not yet be able to get autocomplete for Rhino Common though…for this I needed to get the stubs Steve made.

Edit: Note, when setting this up on a new machine the autocomplete did not work until I had installed Python 2.7.16 and then restarted the machine. So, if the autocomplete is not working yet, just continue until step 3 in the following list!

To get the stubs:

To get Rhino script syntax to autocomplete:

Autocomplete is working for Rhino common:

Some notes on what didn’t work:
I tried to get this to work with Jedi alone because at first glance Jedi appeared to support Python 2.7:

However using Jedi 0.18.0 I got nothing but errors, mostly Lookup errors and type encoding errors that suggested the python versions weren’t compatible.

… then I spotted a note in the Anaconda python package for Sublime Text saying that Jedi is dropping support for Python 2.7.

Next I realized Jedi is the autocomplete that ships with the Sublime Text Anaconda package. (Don’t be confused with the homonymous Anaconda python distribution, Anaconda is installed through the package manager in Sublime text.)

So, it looks like this solution will be deprecated after the next release of the Anaconda package, but at least it works for the moment.

Also, here is how to set up a Grasshopper canvas to run a python file created in Sublime. Just point the PathToPython file path to the python file on your disk by right-clicking the path and say ‘select one file’. 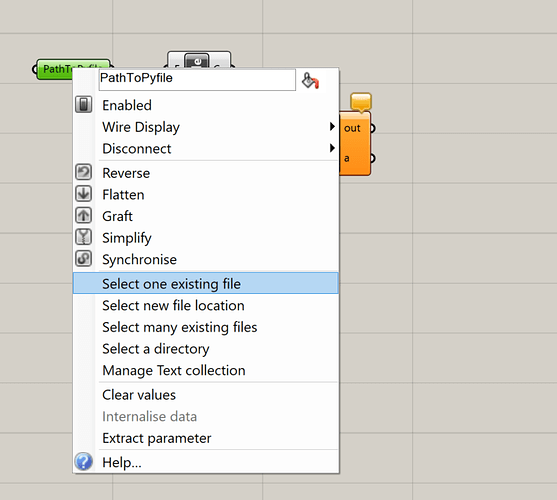 Note that the File component needs to be set to ‘Total File’, so leave ‘Per Line’ unchecked, as below: 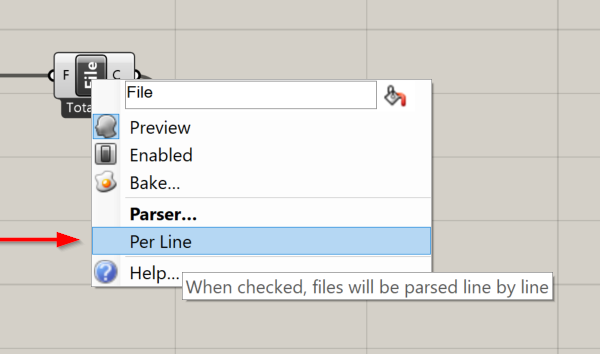 Right-click on the ghPython component and select ‘Show Code Input Paramter’ to expose the correct input. 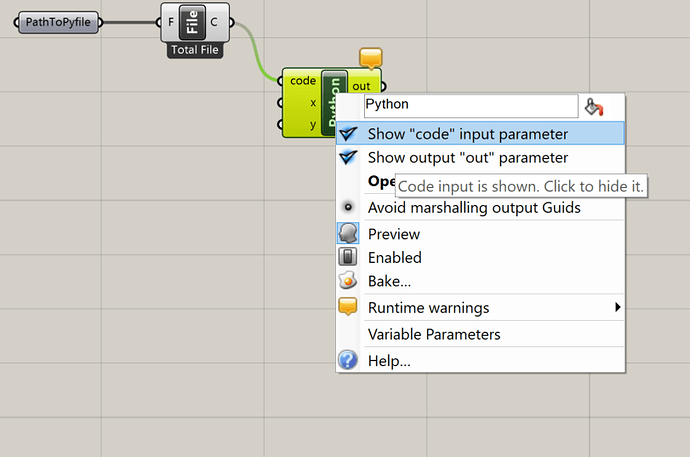