Hello, I wanted to consult regarding this program where I try to generate the intersections of various arcs, where each arc is cataloged in arcs of 90 180 270 and 360 and in addition to these types of arcs are cataloged by colors, which their classification would be by example green arc of 90, blue arc of 90 and so on. From this, the intersections are generated in a certain space and I try to catalog the areas generated from these intersections and see how to catalog them with respect to the types of arcs that are there, as an example of an explanation I seek to generate what it tells me in a area that is related by an arc of 90 green with one of 90 red, depending on how they intersect.
I hope that there is a possible solution from grasshopper and if this can be generated from this catalog, I don’t know if an attribute can be given to a curve or not.
Thank you very much in advance for your time. 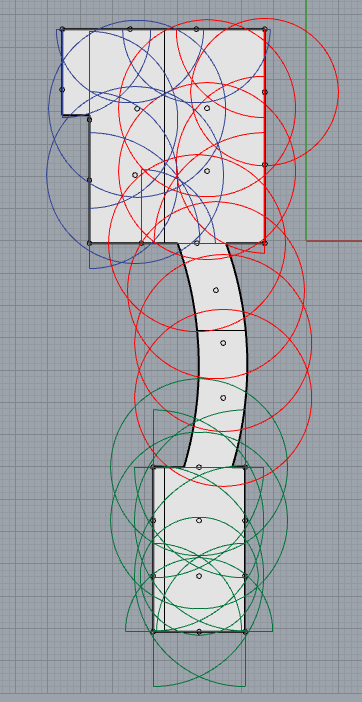 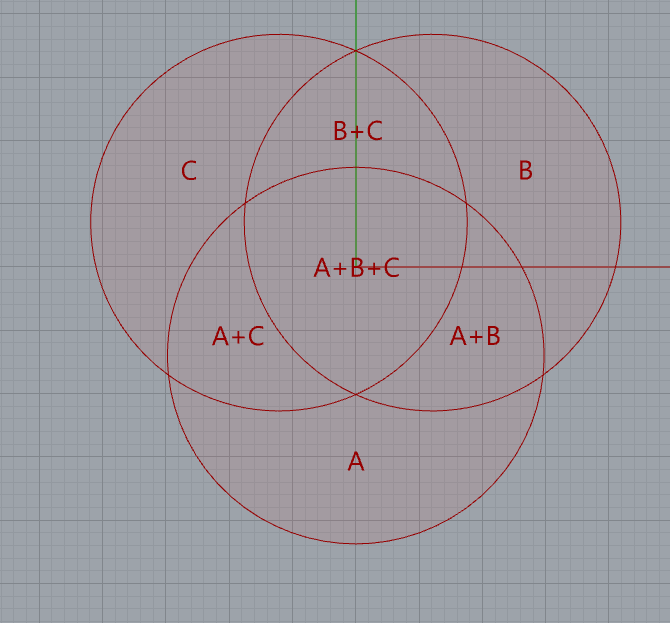 What are you are after is some sort of special (i.e. filtering BrepFaces/Edges according some rules) case of this:

But … I have no idea if is solvable without code (not a very simple one, mind) most notably the conn Tree shown (allows monitoring higher order [nested] Ccx Events).

BTW: if the Crvs collection includes open ones … then the problem is called “primary cirquit detection”.

First providing your example file with geometry would have helped.
I made a quick sample based on several arcs or various angles and colors.

This script tests each piece if the surface and retrieves information about the surrounding curves, displaying its color and angle.

What are you trying to do exactly with this ? 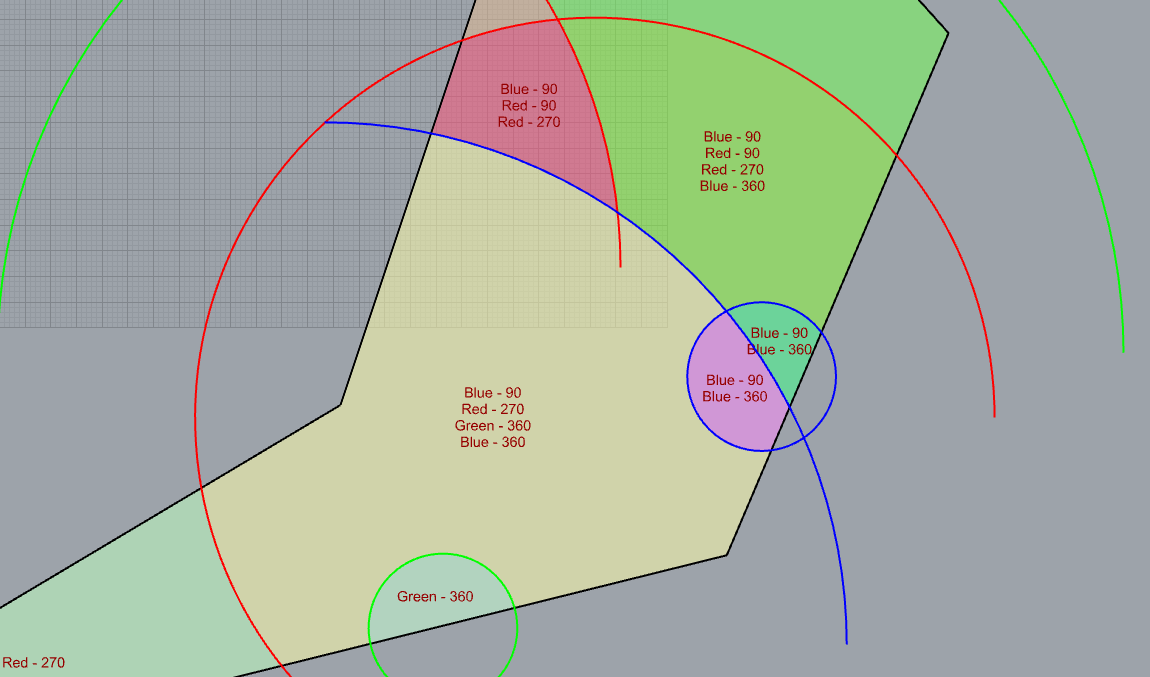 First providing your example file with geometry would have helped.

Gets tiresome doesn’t it? Some of his code was provided by @HS_Kim yesterday in another thread:

Gets tiresome doesn’t it?

Off topic but to beginner’s defense, there is absolutely nothing suggesting to upload a file when creating a new topic - though it should be somehow obvious -, and not everyone reads the guidelines - though it’s recomended.
Hasn’t anyone ever thought of adding a line of text to suggest that, or a pop-up message like what every mail client does when it detects you may have forgotten an enclosed document ?

Off topic but to beginner’s defense, there is absolutely nothing suggesting to upload a file when creating a new topic - though it should be somehow obvious -, and not everyone reads the guidelines - though it’s recomended.
Hasn’t anyone ever thought of adding a line of text to suggest that, or a pop-up message like what every mail client does when it detects you may have forgotten an enclosed document ?

Yes, forum admins could do more to address the problem. Many sites have a checkbox on their terms of service page to indicate that you read them. You can’t do anything without checking the box.

On this forum, people who beg for files are punished if their request is not polite enough. I was insulted by your “shoots you in public” remark a few days ago…

The main idea is to generate from these curves the relationships of each arc with its attributes in which are the arcs and their angles that each one has, removing those intersections and thus achieve greater clarity which curves are related to each other. . This is why I was trying to understand your process to carry it out in the plane in which I am developing it, in which there are a greater number of curves, but when relating your grasshopper with my plane, it becomes more complicated because I don’t know manages to get all the data.
I don’t know if another change should be made within these connections in order to adapt it or if it is more complicated than I thought.
In any case, I am attaching the model I am working on to see if it is possible to carry out this exercise from the intersections of the curves.
Thank you very much in advance for your time and your willingness to help me with this problem!
CALCULO PARA PLANOS COMPLEJOS.3dm (90.1 KB)

Could you precisely describe (picture, words, diagram, something explicit) the data you want to extract from these curves and their relationships. You mention intersections, but you are also referring to the areas generated from the arcs, which is not the same thing.

Do you want :
for each area surrounded by arc(s), the complete list of arcs that compose the border, with the respective colors and dimensions (and names, tags, whetever information is stored on the arcs)
OR
for each arc, the list of intersecting arc(s), with the same list of information as above.
OR
something else ?

And how should the result be displayed ?

The idea is to carry out from some irrigation plans, where these are the different arches that are within the plane in which each arch in its interior is generating intersections from its attributes that each one has, that is why What is sought to be done from these intersections, know in their areas that are generated from these curves, how to catalog them and know in each area what type of curve and color it is related to, I will leave you attached the file in which we are still working and how from their arcs they try to catalog one intersection over the other.
Another question that arose within his file is to know if the relationships can be limited only by counting the interior of the arches, since the interior of the arches is what is important within it.
I hope that the question in which we are raising you can be understood, and your help would be greatly appreciated, since it has taken a while to develop this result of the exercise.
Thank you very much in advance.
PLAN BASE.3dm (68.5 KB) 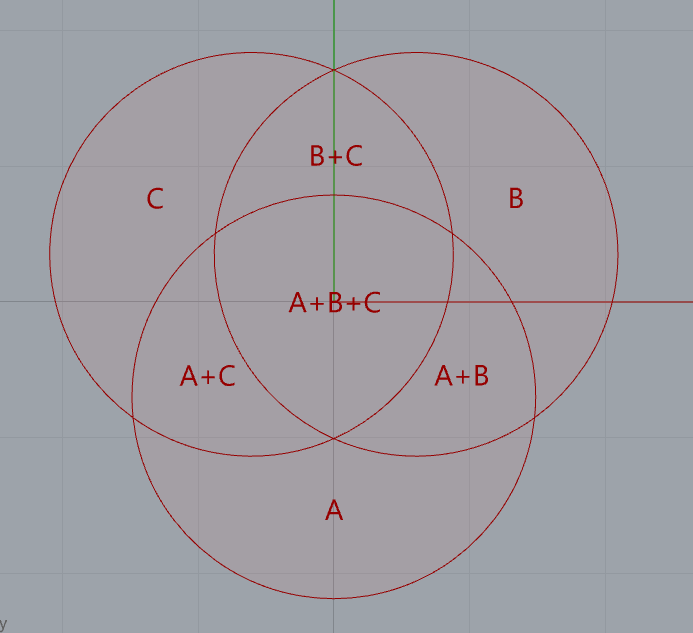 image693×633 11 KB
In this image we try to explain the idea of ​​relating one curve to the other, but the complexity of the exercise is that in addition to 360 curves, there are also 180, 270 and 90 degree curves, which are the irrigation nozzles that exist .
From this, an attempt is made to generate in the total plane the different areas that are related to different arcs and colors that comprise it. 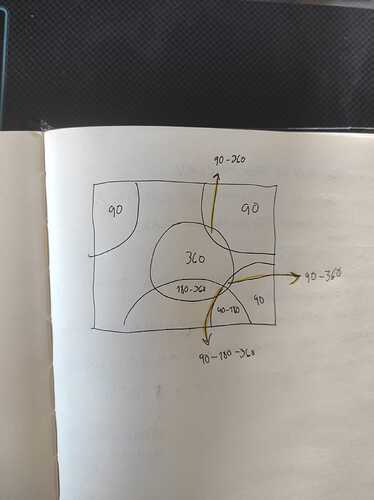 Imagen de WhatsApp 2023-01-30 a las 17.13.161197×1600 82.6 KB
In this image I try to explain the idea of ​​how the exercise should be developed with respect to the intersections of arcs and their relationships only in the interiors of the arcs, since the arc is not relevant on the outside, only inside

Once again, thank you very much for your time and I hope not to take away your time. thank you.

The solution I posted earlier seems to achieve the intended result.
I changed the colors RGB values according to your file.
I added a test to flip all arcs counterclockwise around world Z, and then check with Curve Side if the arc should be taken into account or not.

The result are text annotations inside each area with the colors and angles. 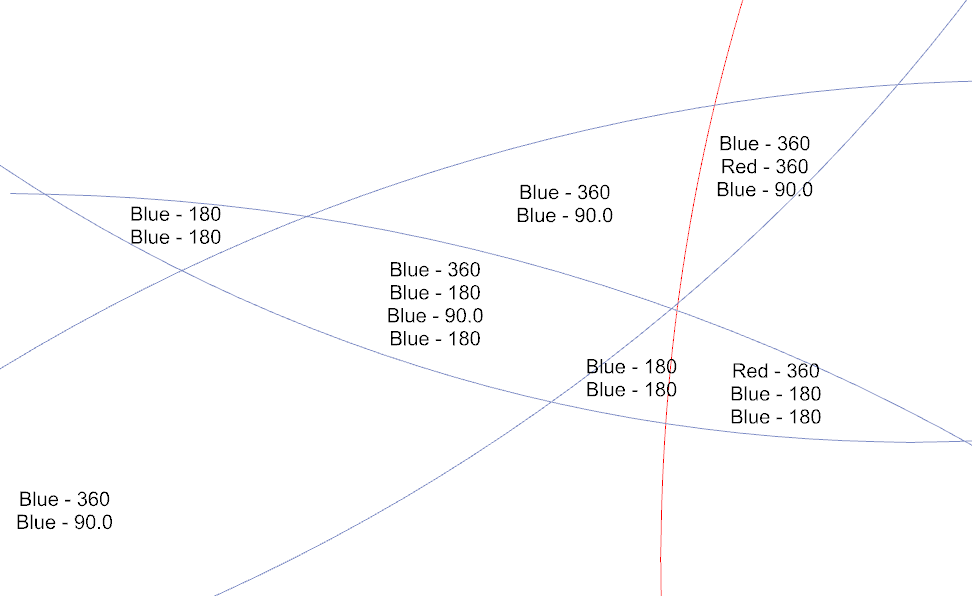