Advanced fillets, is this a plugin?

Attached is a photo progression of the procedure I used.

I first laid out my lines in MoI, this can obviously be done in Rhino but I can accomplish this faster in MoI so that is what I use. Next I used the curve blend tool in VSR to create the curves marked in orange and in green. I then extruded the green curves and exploded the extrusions to create a polysurface. I then used the surface from planar curves command to finish off enclosing the area for the multiblend. I ran the VSR multiblend command and adjusted a few parameters using the lightlines command in VSR to fine tune. I then did a trim on the extrusion and mirrored followed by running some planar surfacing again to clean things up a bit. Hope this is helpful.

Regarding the original post, wouldn’t the Autodesk T-Splines plugin for Rhino give very similar results?

I have been doing some tests using T-Splines of the last couple of days and yes…when converting a T-Splines mesh to a Rhino surface you can get similar “attractive” fillets. Perhaps not with the same amount of construction lines accuracy given the T-Splines process is a little more organic though.

Any thoughts from other T-Splines users?

Thanks a lot for that!! So it is a case of creating the setbacks manually, it looks great though, if ASM could add an auto setback feature like Alias, that would be an amazing!! Really hope Autodesk do not intentionally hold that back to protect Alias!

I have learnt a lot from this and feel it is my obligation to be exact about what I have discovered. So indeed I tried it in Alias using imported Rhino surfaces (via the 2004 .DWG technique) and found that it was actually the Round Tool (with setbacks) that was used in all cases. It seems reasonably easy to use 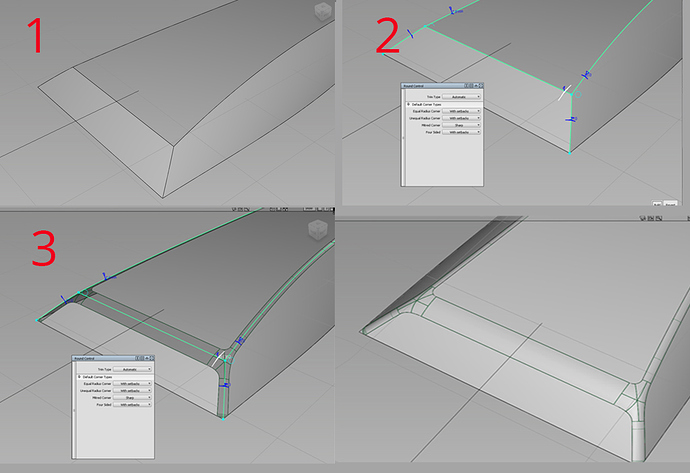 I really hope McNeel can take the fight to the evil ones (Autodesk) and integrate native tools like that of VSR/ASM in the future!!

I can’t fault VSR for accepting the offer to be acquired by Autodesk. From a competitive perspective it was a smart move on Autodesks part to make the acquisition, not that Alias users would necessarily switch wholesale to Rhino with VSR but I could see that it might bite into a few new customer sales of Alias. It also was likely an opportunity for Autodesk to pick up some really qualified former ICEM developers with extensive experience.

I can’t see Autodesk making Shape Modeling for Rhino a priority, and that is unfortunate because I was really thought VSR was hitting their stride with their last version of software. I do know that VSR generally creates cleaner more controllable surfaces that the available equivalent Rhino commands and it would be nice if if I didn’t have to use a plugin to make that happen. I’d be genuinely surprised if McNeel integrated these sort of surfacing tools into v6.

It’s possible to do manually with Rhino’s tools; 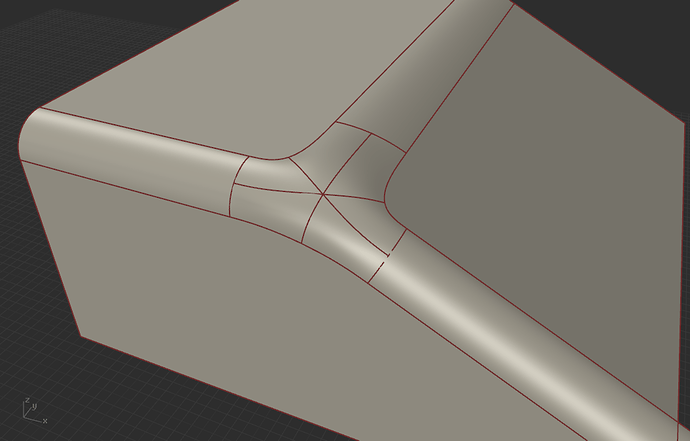 I have a friend who is an experienced T-Splines user and he just uses the tsmatch command when he needs his t-spline surface to be perfectly aligned with other geometry.

In my experience these fillets may look cool but they produce pretty poor looking results. There’s always a noticeable dip in the multipatch. The corner blends are super obvious as the surface continuity falls off abruptly. The rare occasions I’ve seen them used, Is on parts that are concealed from view. I would put this at the bottom of my list for fillet improvements/features for Rhino.

I tend to agree with Stratofear. If a continious fillet was used along the length of the object perhaps a clean shape could be produced the slmost same result, with little or no hand work needed to blend IMO Mark

I agree with @Stratosfear - MultiBlend was something I thought was sooooooo cool with VSR when I started using it - but really, the problems that he mentions are true. It’s the sort of thing that looks good at first glance, but then you realize that there’s almost always a dip or bump. I will, on a rare occasion, use it to fill something 3 sided. Does a decent job of that. Not perfect, but decent. Sometimes. Not always.

This shape is super easy to do with just classic Rhino tools. I’ll whip up an example this weekend if I have time, but really there is no reason to do the trims on the top surfaces, the ones that are the arc shaped ones. If you get rid of those, the whole thing just becomes a three patch blend between the top and sides. This is an example of the super high tech tool doing a worse job than just classic NURBS modeling.

Wise words, you sum it up perfectly.
VSR did open my eyes to what Rhino could be, to have a Class A tool set available is a game changer.
Fingers crossed McNeel are getting or will get advanced surfacing developers on board for the future…maybe V7

A lot of my sentiment comes from clients becoming far more savvy on Class A surfaces (I work in Industrial Design), they are selecting consultancies on their ability to provide high quality surfacing solutions (and I mean Automotive standards) whether for FMCG or consumer electronics. I am being forced to learn Alias to stay competitive however I am also an unashamed Rhino fanboy so VSR/ASM provides hope. The market is really changing now, there are so many 'CAD Sculptor ’ jobs appearing now for major consumer product manufacturers (which I understand from the job specs to be high quality surfacers).

Regarding the comments of this fillet solution being problematic, I am not finding this with the Alias Round Tool that was used on the model I first began the topic on. The standards that are beginning to be set in my workplace are that we must use quad surfaces for continuity and also the Alias Round fillets passed our curvature and continuity requirements hence my trying to discover the method in the first place, definitely no discontinuity or pinching. I am trying to analyse this without any bias or emotion.

With the greatest of respect the VSR/ASM multi-blend tool requires an understanding of what it is doing with the underlying geometry to be effective, it is not automated like the Alias round tool so this may possibly explain issues that have arisen with its use.

I am just happy today finding an answer to my question and will continue to use Alias and Rhino in combo from now on, well in triple combo with a solid modeller lol, such is life!

If you toss me the untrimmed surfaces in this example, I’ll happily show you another way.

Please post an example of alias’s set back fillet in step. It might pass alias’s built in surface evaluation. But that does not mean that the intersection surfaces don’t look like someone spent too long manually sanding them.

I agree with you on VSR, I’ve used it on more than one project with excellent results, it is refreshing to be able to examine techniques that Alias users perform and duplicate those without incredible effort using VSR. I also agree that the bar is being set higher in terms of what a customer expects to see from designers, including the markets you mentioned.

Keeping that in mind I see that the opportunity is still there for a product to fill the gap that provides a legitimate surfacing toolset, but I’m not so sure it will be Rhino or a Rhino plugin. Rhino seems to be pulled in too many directions at the moment and I doubt any developer wants to put in the effort for a somewhat risky ROI writing for Rhino, I don’t see an exit strategy happening for the next surfacing developer hoping for a VSR/AD situation.

I just hope v6 of Rhino will keep plugin compatibility with v5, plugins including VSR are just too valuable to me to lose.

I just hope v6 of Rhino will keep plugin compatibility with v5, plugins including VSR are just too valuable to me to lose.

That’s not going to happen.

Slightly off topic…but in reference to the previous comment regarding V6 compatability with plug-ins…or coming from the other angle…current plug-ins compatability with V6…will such information become available to us users etc. nearer to the V6 release? I realise that plug-in compatability is the responsibility of the plug-in creator…but is it naive to assume that those very popular plug-ins such as T-Splines will keep themselves updated? It really is one of those frustrating things with Rhino. A double edged sword if you will. We all want updates and developments and so anticipate the release of major upgrades yet so often are we also concerned whether the plug-in creators will also jump on board for these advancements.

Sorry I’m late, things have been busy… There’s nothing very advanced about this, I think this example shown here it’s the typical cool tech-demo of how to waste development resources fighting a losing battle with an arcane topology type. A perfect fit for Autodesk indeed.

The kind of innovation that the famous Henry Ford quote (unclear if a true quote) captured very well:
“If I’d asked my customers what they wanted, they’d have said a faster horse.”

I rather have Rhino’s fillet/blend tool use its own subD engine to do something like what I did with it here:

That could be generated by:

You can imagine this for an end-user being more easily editable. You could change blend distances if you have enough computer power and the McNeel geniuses put serious effort in optimizing these new technologies. …Not only editable by these Rhino routines, but also by Grasshopper.

For that to happen, we need to stop asking them for faster horses. That’s distracting.

Not only editable by these Rhino routines, but also by Grasshopper. 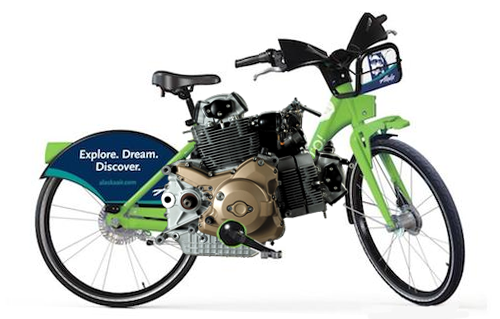 OST,
Nice manual corner!
Been there, done that.
Takes WAY too much time.
What happens when the geometry changes?