I am making a script that does this: Last version of the tool can be found here:

On this page I am collecting page layout tools that I am working on regularly. All latest versions of these scripts can be downloaded from my github. Advised is to download github for desktop to keep the files in synch with any changes and bugfixes. 01 add_detail_scale.py Adds scale info as a caption to a (preselected) detail 02 annotation_balloon.py This tool adds annotation balloons to Blockitems on a page. After that you can run addPartList.py script (below) to add a part list 03 add_pa…

I would be up for testing and feedback

it’s still quite simple in its current state though, it’s more a concept. But anyway here it is:

annotationBalloon.py (4.4 KB)
One of the ideas for next steps would be not generate the parts list directly, but rather recording it.
The list that is generated includes item count that updates automatically when adding more of the same blocks.

One of the ideas for next steps would be not generate the parts list directly, but rather recording it.
The list that is generated includes item count that updates automatically when adding more of the same blocks.

I’m not exactly sure what to do, when I’m asked to modify the start value (or press enter)? When I simply press enter, the following error appears:

I’ve tested the script in Rhino for Mac 5.5.3 in Perspective view.

Strange, that method should be available according to
https://developer.rhino3d.com/api/RhinoCommon/html/M_Rhino_Input_RhinoGet_GetPolyline.htm

Anyhow, I’ll see if I can work around that making my own polyline as I did before here:

Curve On Surface with rebuild (how to solve preview interruption?)[solved] Scripting

as an exercise, I’ve made a curve on surface script that rebuilds the curve while drawing, and gives the user the option to change number of points during the command. I’ve taken the approach to add an empty point to the picked points that gets overriden by the dynamicdraw function CurrentPoint. Everything seems to work except I can’t solve the issue that stops the dynamic draw from drawing the curve as soon as the CurrentPoint is equal to the last picked point. I was able to solve the issue f…

Yes I think the underlying rhinocommon methods are there but not the rhinoscriptsyntax wrapper function.

I tried adding it in by hardcoding

Which seems to work … still testing … Am I missing something with the automatic numbering?

Am I missing something with the automatic numbering

Ah, yes that’s another thing. But I don’t think I can fix that, because that functionality is not in Rhino 5 (Mac nor windows)

Btw: the idea is to start numbering at 1 and in layout. This will add the table to the lower left corner of the sheet. This I want to change later as mentioned by recording the steps where there will be a function to generate the table after the fact.
If I do that I can probably also work around the numbering issue

For this I need to change a few more things, namely recording the selected block item into the balloon properties. Then I can collect the balloons after the fact to retrieve the block information

A couple of other thoughts:

Is the scale hard-coded

It’s designed to work in layout space (mm) but you can change the size of the balloons. Minimum radius is 3
This means if your pages are inches, they will be huge

this would need a custom undo event.

Is this possible, and if so how?

Demonstrates how to set up a custom set of actions when the Undo command is called.

I have used this successfully here

this version should work both in Rhino 5 and 6. Nice thing is that I added some code that checks your Rhino version, so it gracefully degrades to a static number if you’re using version 5. This will change later when I change the code as described. I now use GetPoints instead of GetPolyline. Works just as well.
No custom undo yet… and I might not even need it when I rewrite the code.

Nice work, @Gijs! I hereby confirm that it works on Rhino for Mac 5.5.3.
Why is the legend table organised from top to bottom, starting with the last created block, and not the first one?

I hereby confirm that it works on Rhino for Mac 5.5.3.

Why is the legend table organised from top to bottom, starting with the last created block,

No real reason for that to be honest. I’m going to change it completely anyways because I want to make the table updatable. But for that I need to improve my coding skills

I’ve now made a version that no longer asks for a number:
instead it automatically keeps track of the numbers and seeks a ‘free slot’

Unfortunatly I cannot yet make this work in Rhino 5, so if anyone has a solution for this issue I might be able to make it work in v5 as well:

furthermore, it no longer generates a table, but makes the table only after the fact on request. The table is ‘recorded’ and can be updated at any time by running the script again.

When deleting balloons, these will be removed from the list after rebuilding.
in action: 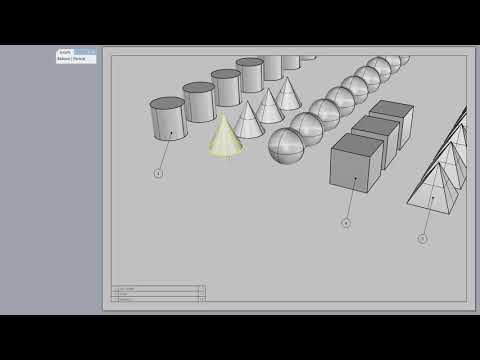 Just got reply from Dale that there is no group user data in Rhino 5. Guess that means no dice for Rhino 5 unless someone has another workaround.
I can’t rely on group names either because even when they are deleted they still remain in the group table and are not flagged as deleted. See this thread.

Hi. Do i have to make polysurfaces into blocks before using this script, or is there a way to use it directly on polysurfaces?

@leg3 It works on blocks only. The script is open source so feel free to make any adjustments. You can also consult me if you need specific things added.