Yes, you’re correct, I find that only the ‘normal’ loft style will result in a successful closed polysurface following the createsolid command.

There is no explanation in the help menus in regard to the ‘createsolid’ command, its only referred as an ‘undocumented command’. I think in order to be successful it requires a set of intersections that define a closed volume. In other words, a number of overlapping surfaces that enclose a space within.

There is no explanation in the help menus in regard to the ‘createsolid’ command,

Note: The CreateSolid command expects overlapping and intersecting surfaces as input. If the objects are simply unconnected, the Join command is normally a better command choice.

… this info is only available when accessing help when using ‘F1’ key. I assumed that all commands would have been described via the help ‘panel’ too. Never assume.

A post was split to a new topic: What is a degenerate surface?

Hi. I am working with a canoe that I have designed from scratch. I have had many of the same problems I see in this thread and solved a few of them. I think that what you did on the “CanoeCurvesTest4” would solve the last of my issues with the hull shape towards the bow and stern. How did you arrive at, or generate the two “extended cross sections” that are situated outside the canoe fore and aft? They don’t look arbitrary but rather as if they have been generated from the previous cross sections some how.

Hi Johan,
The outer loft curves are indeed a copy of the midship curve. I first have made an interactive centerline by _Intersect and RecordHistory. Secondly I play with the control points of these outer loft curves until this centerline has the shape that I want (or that I have sketched on forehand). I see that I played also with the number of points and the pointweight (see below screendump). 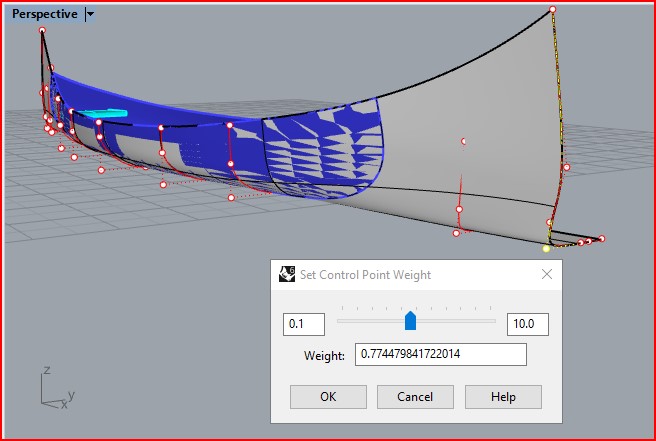 Hi Bas. Thank you for taking the time to respond. I see that it’s been a while since this thread was active. This thread is the reason I joined this forum.

I don’t understand your command _Intersect and RecordHistory. This is the step that intrigues me. I’m hoping that you can explain this in more length.

From the cross sections given I think your approach works! As a canoe enthusiast though, I see a problem. Not with the generated hull shape per say. I think the problem is in the 2D design stage of the canoe. The mid cross section and the first stations out from it are just a tad to flat in the keel (maybe even has an inverted kink towards the keel?) and the mid ship rocker is also just a little bit to flat or has a kink. This is what generates the dreaded “oil canning” or inside convex bottom in the middle of the canoe.

If the curve analysis is carried out, all lines faired and adjusted to make a little rounder bottom profile, and the rocker adjusted slightly. The canoe should be technically flawless!
Then the rest is a matter of production and ones preference in canoe hull shapes.