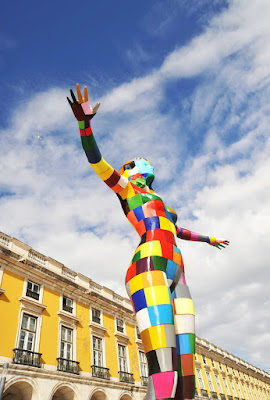 This very large 3D printed sculpture was created by Portuguese artist Leonel Moura. Moura, an artist with a history of combining art, robotics, AI, and 3D printing. Moura shows work around the world, from Brazil to China. In the U.S., he has a piece in the permanent collection of the American Museum of Natural History.

The 5-meter tall woman figure stands arms stretched wide like most 3D models, with a firm gaze fixed on the horizon in front of her. Made up of 300 multi-colored 3D printed blocks and fittings, she resembles a high-tech harlequin.

Moura created the pieces out of PLA plastic using eight permanent 3D printers in his studio. The creation of the piece, titled “3D Europa”, has taken six months to develop. It included collaborations of many people, plus a few companies like Beeverycreative, 3DFactory, and Wurth that sponsored and provided for several fixing materials.

The model was done in Rhinoceros.

The sculpture was presented at the ICT 2015 conference organized by the European Commission in cooperation with the Town hall of Lisbon.

It is no surprise that Moura has turned his attention to 3D printing as he has been fascinated with the non-human components of artistic creation. Tapping into this “artificial creativity”, as he terms it, means acknowledging that there is more to art than intention. After all, several art movements, since surrealism, tried to achieve an art without conscience or intention. Moving from this complete intentionality, Moura works to integrate and create ideas and processes beyond his control in conjunction with the machine. As he explained in his manifesto:

“I discard the relevance of the lack of intentionality and consciousness in robots. It is well known that in modern art history there are many examples of art movements and artists that aimed to achieve precisely those goals. Actually modern art is rooted on the exploration beyond common sense reasoning towards the fields of subjectivity, experimentalism, randomness and more recently chaotic determinism and emergence. Machines can in fact ‘do their own things’ since, once the process is triggered, the result is not only independent from the human that originates it as it is unpredictable. This means that the product of ‘artificial creativity’ is human at the start but nonhuman at the end.”